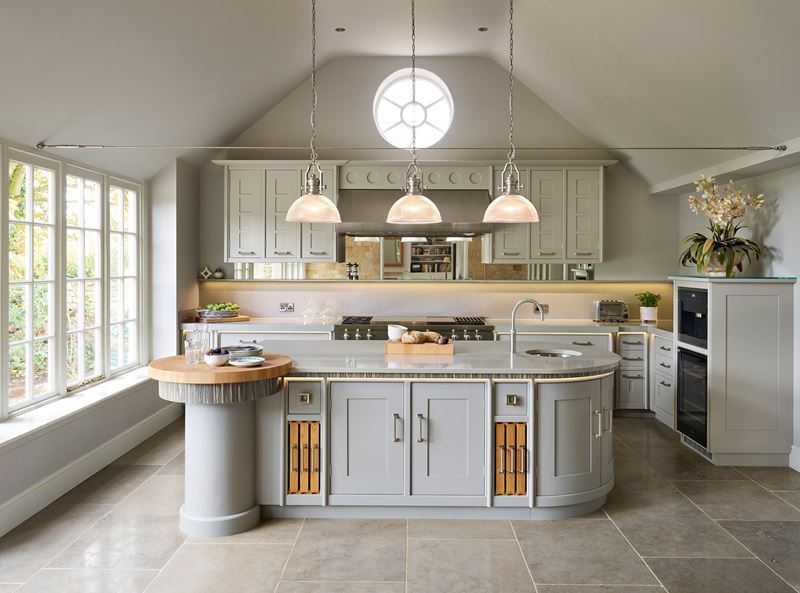 How lovely it must be, living in an old rectory in the heart of the English countryside.

But alas, awfully cramped when it comes to entertaining. Because this particular old rectory had a very small kitchen, unsuited to the way we live in these modern times, its owners got in touch with designer Martin Holliday of Chiselwood, Ltd.

Martin creates handmade kitchens and furniture, produced by his own craftsmen, and even has 45 colors of Chiselwood paint manufactured just for his company. He was the ideal choice for a project like this: an early Victorian listed building that required respectful remodeling, and was subject to stringent building regulations.

The first challenge was finding a new location for the kitchen. The existing one was in the front of the rectory, looking out onto the driveway. It was dominated by a large chimney, which limited what could be done in the room. In the rear of the rectory, however, there was a large conservatory that looked out on the extensive garden and beyond, to a picturesque valley. It was all glass – hot in the summer, cold in the winter – so it was not used often. Martin and his clients decided it would be an ideal location for the new kitchen, but that would require a roof, a new wall and efficient radiant heating.

The clients also agreed to give up a home gym adjacent to the conservatory, which allowed for a scullery with a large pantry, crockery cupboard, and refrigerator and freezer combination unit so that the mess of dinner parties could be kept out of sight.

Once the new kitchen location was determined, all changes had to be approved by planners, due to the historic listing of the property. Any changes to the outside were very strictly governed. The new solid wall at the far end, which houses a Wolf dual fuel range, had to be carefully ducted so the venting could not be seen on the exterior stone wall. The planners didn’t like the guttering on the new wall, so it had to be redone just weeks before the kitchen was completed.

The new kitchen space is generous, so Martin had to ensure that the layout is efficient for both food preparation and entertaining. By locating the kitchen at one end, and placing a large island parallel to the range wall, he created the necessary working areas. The pantry with its double sinks and refrigerator and freezer is just steps away, and functions as a second food preparation area, out of the flow of traffic when entertaining company.

As you might imagine, given Martin’s reputation for bespoke kitchens, there are numerous thoughtful details in the Old Rectory project. We love the circular theme that he has created, starting with the beautiful round window on the range wall and extending into the detailing over the range hood, the rounded corners of the island, the beaded detail on the cabinetry, even the lighting.

The client’s reason for selecting Sub-Zero refrigeration is an interesting one: she wanted something with capacity enough to handle large catering trays and volumes of food when she was entertaining. It’s something others might think about when they’re selecting their own appliances.

This was an enormous renovation project, smashingly well done by Martin. While the old conservatory space was charming, it simply wasn’t very functional, and wasn’t used by its owners nearly as much as it should have been. Now they have a comfortable gathering space where they can dine and entertain, or just relax and enjoy the beautiful garden view.